Submit your hockey life and / or trophy case story here 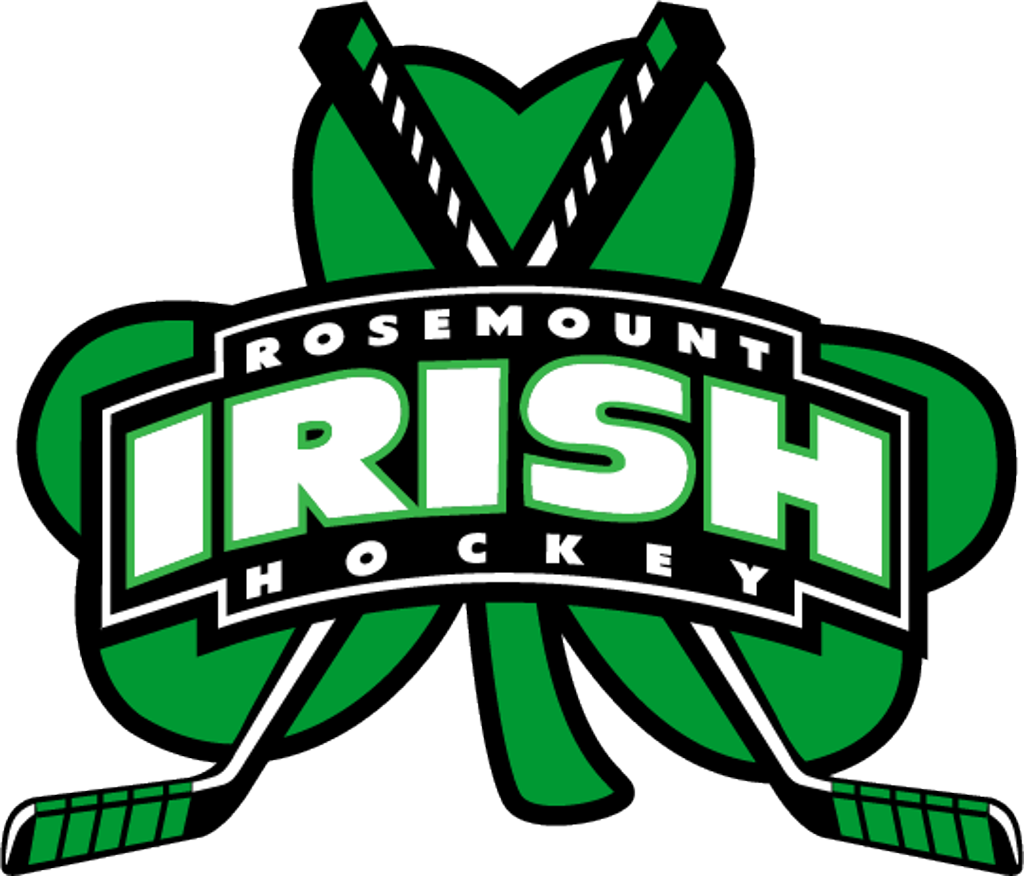 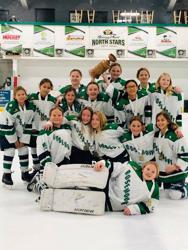 Congrats to the 12UB Green Girls for earning an exciting 3rd Place Finish at Breezy Point.  The Irish opened up with a 3-1 victory over Hibbing, but would fall to a tough Stillwater team 4-0 in game #2.  Two more victories over Brainerd 3-0 and Northfield 5-1 would earn a rematch with Hibbing for the 3rd Place Trophy.  Three periods were not enough to end this game as the girls would enter OT all knotted up at 1 goal apiece.  An edge of your seat NHL style 3 on 3 OT session would decide this one and Avery Elsen would end up the Irish Hero with her winning goal.  Congrats to the Players, Coaches and Parents on a Great Weekend and for bringing home the first Irish hardware of the tournament season. 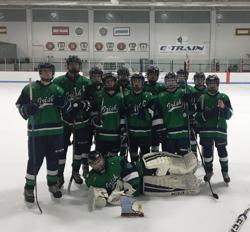 The Bantam C team takes 3rd place in the Bloomington Winter Classic. In pool play the Irish beat Sioux Falls 5-0, fell short to Shakopee 3-2 and ended pool play with a 3-2 win over Stillwater. The Irish took on Mahtomedi for the 3rd place game. The Irish worked hard and won 5-2. Congratulations on a great tourney! 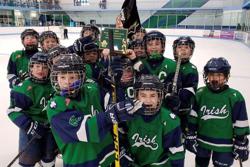 Squirt B2 White took home its first hardware of the season after emerging victorious in a nail-biting consolation championship game at the North Metro Pirate Classic. Following a scoreless first period, Rosemount took a 1-0 lead over Blaine in the second before popping in an insurance goal to make it 2-0. As Blaine answered with its first, the Fighting Irish didn’t let down — instead pressing on to put another past the tender for the 3-1 lead. But the Bears roared back in the third period with its second goal, then pulled its goalie to opt for the six-man advantage. And the strategy worked, with Blaine tying the game at :35 left in regulation. The Irish, bolstered by encouragement from its coaches on the bench before a tense four-on-four sudden death overtime, clinched the win with a decisive top-shelf shot from #95, Robby Lurtsema! 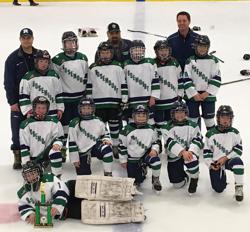 2019 Rosemount Irish Ice Classic Tournament 10UB1 3rd Place Victory The Rosemount 10UB1 Girls pick-up their 1st trophy of the season with a 3rd Place finish at the Rosemount Irish Ice Classic Tournament. They were off to a strong start with a 7 - 0 win over Armstrong Cooper. While their 2nd game against Blaine/Spring Lake Park was a loss the girls didn't let that break their spirits as they would come back with a 6 to 3 win against Thunder Bay Fury which was what they needed to secure their 3rd place victory. We are very proud how quickly our girls came together and how they have learned to work as a team. We are looking forward to the rest of the season! Go Irish! 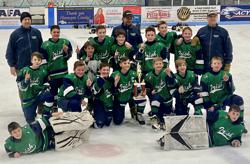 The Peewee B2 White Boys ran the table at the New Hope Classic earning the Championship Trophy.  The Irish beat Mound West Tonka 7-2, Centennial 4-2 and Roseville 7-2 moving them to the Chip against Armstrong Cooper which Rosemount would dominate in a  7-2 win.  Congrats to the Boys and Coaches on a Great Tournament. 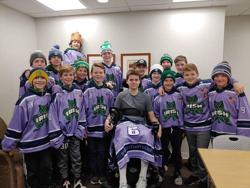 Thanks to the Awesome Peewee A Team for stopping in to see Joel Carlson and present him with a Team Jersey. 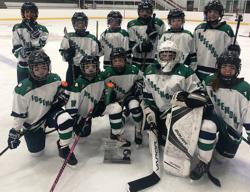 The Rosemount Irish 10U A girls knew their first game would be one of the toughest of the tourney. They came in and fought with some strong defense against Blaine/Spring Lake Park, tieing the game 1-1. Saturday they were up against Chaska/Chan first, taking that win 2-1 in a close game. After a team lunch and some bonding time, it was time to take on Hopkins and fight for the #1 seed spot. With the win 4-0 and the extra shutout point, they succeeded in their goal taking #1 seed in the tourney! On Sunday afternoon, they would face Blaine/Spring Lake Park a final time. In a hard fought battle in this championship game, they played as a team and took home the 2nd place trophy! It was a fantastic weekend of hockey and team bonding! 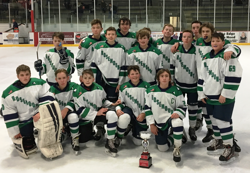 The Bantam C team took 2nd Place in the Inver Grove Heights tourney. The Irish beat the Wayzata Trojans 8-0 on Friday night. Next up was New Prague on Saturday afternoon. The Irish won 6-2. On Championship Sunday the Irish fell short to the Des Moines, IA Bucaneers 8-2. Congratulations team on another great tournament!

Squirt B2 White Earns 2nd Trophy of the Season 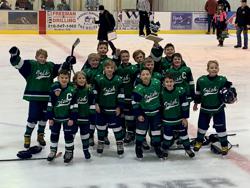 Rosemount Squirt B2 White took home its second trophy of the season after clinching third in Walker’s the City on the Bay Tournament on Dec. 15. The Irish kicked off the weekend with 5 goals in a shutout win over Mora on Friday, before splitting Saturday with a hard-fought 3-7 fall to Brainerd, followed by a decisive 7-3 win over Wayzata. Sunday afternoon’s final competition pitted Rosemount against the host team from Walker, with the Irish edging the Ice Wolves 4-3. More important than the hardware is the Irish being recognized by both the tournament director and the officials for demonstrating outstanding sportsmanship and positivity throughout the weekend — something for all of Rosemount boys and families to be the most proud of. 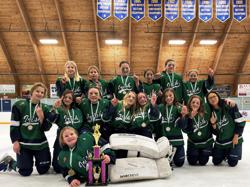 Congrats to the 12UB Green team for wining the Sugar and Spice Championship in Hastings.  Although the score may not show it, game 1 was a competitive game vs. a tough Rochester team. Rochester pulled their goalie at the end of the 3rd period when it was 3-1 and we were able to score an empty net goal to seal the win. Game 2 was a nail biter throughout the entire game. With the final minutes ticking down in the 3rd period, Melia Forster stole the puck from the Hopkins defense and made a beautiful shot to win the game! Game 3 was a hard fought, physical game, but in the end Rosemount came out on top. St. Peter scored the first goal, but after an injury to one of our girls, Rosemount came back with fire and an unending determination to win the game. 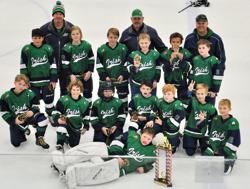 The Boys had a great weekend of games. From Friday evening with a strong win against the Rochester Black 5-3. Saturday morning was a great showing for a 7-1 win vs Mankato. The evening of Saturday we went against Lakeville South and put up a 5-0 score. The Championship was against a very strong Rochester RED team that has join our District 8 schedule. We were slow out of the gate and had a 6-2 deficit going into the 3rd period. The boys came out and exploded for 4 goals in the third. Rochester was able to get one in between and came out on top for the championship trophy 6-7. A great weekend!

Squirt B Blue Win it All in Rochester 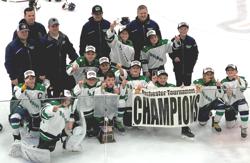 Squirt B Blue celebrated it's first championship win at the 2019-20 Rochester Squirt B Invitational. The Irish won 4 games in row, starting with a 15-2 victory over Mason City. Their second game ended with a score of 3-2 against Rochester Silver. Game 3 gave Squirt B Blue a 4-2 win vs. Rochester Grey. They captured the 1st place trophy with an 8-2 win over Waterloo. Squirt B Blue played with a great deal of heart and grit, and we are proud of how they came together as a team and set a positive example on and off the ice. Go, Irish!

Levandowski goal! 6-2 assist to Weismiller and Bawek 12:38 left in 3rd